Nick Vasos was feeling sick when he tried to ask his bosses if he could stay home Friday, according to his station, Nexstar’s WDAF in Kansas City.

Maybe that’s why when he hit “send” on his e-mail, it went to all 197 Nexstar television stations across the country.

An outpouring of faux sympathy followed, then escalated into an ongoing 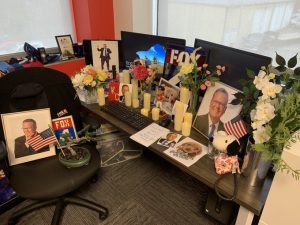 And his desk was turned into a shrine by co-workers.