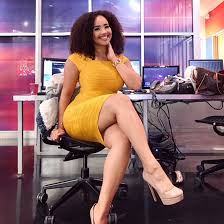 It’s now pretty much a foregone conclusion they will become even more elusive.

Obilor posted a blunt, threatening video on her public Instagram account, accusing an unknown someone of stealing her weight belt, and vowing to track them down.

“I have a very special set of skills,” she says. “And I will find you. And I will kill you.”

Not the least of her skills is her adeptness at self-promotion.

Soon after she arrived in October 2017 from a Las Vegas TV station, WFAA aggressively promoted and supported Obilor’s very public claims that she had been “body-shamed” in a Facebook comment.

Her departure in October is said to have been prompted, in part, by friction between Obilor and some of the station’s morning personalities.

But station gm Carolyn Mungo said she also left “to develop and prepare for what could be next. We all know traffic is rarely a life-long career! She says it’s time to explore. We wish her the best and will be cheering her on.”

Obilor for now has returned to Las Vegas.