Frame it anyway you want. 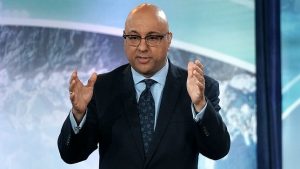 The recently announced scheduling shuffle at MSNBC results in Ali Velshi being relegated to weekend mornings starting in January.

He currently anchors a weekday hour, preceded by a program he co-hosts with Stephanie Ruhle at 1 PM

MSNBC will be shaking up its weekend roster in the new year, giving a new morning show to Ali Velshi and tapping Alicia Menendez for a pair of afternoon slots.

Velshi—commutes to Philadelphia where he teaches a course at the University of Pennsylvania’s Wharton School— will also continue as a fill-in MSNBC primetime anchor during the week.

The weekend shake-up comes as MSNBC is expanding its live weekend programming and breaking news coverage going into the 2020 presidential election.

But weekdays to weekends is not the promotion one looks for.