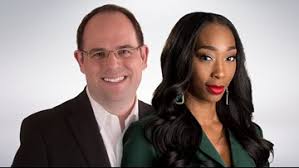 It says so right here in this press release which informs us that anchor and investigative reporter DeJonique Garrison (left) and assistant news director Jordan Williams (right) have been named the new evening co-anchor team for KJAC – the on-air promotional name for KBMT-DT2 in Beaumont Texas..

“DeJonique and Jordan are the news team Southeast Texas needs right now,” news director Daniel Brown said. “The community has trusted them with some of the biggest stories in the last few years — from Harvey to Imelda — earning them a reputation to deliver the news with both passion and humility.”

Both of them have extensive backgrounds in news.

Garrison’s high profile comes from her work on “The Beat,” a program on the KJAC.

Williams returned to his native southeast Texas after an anchor stint in Buffalo, NY and a five year hiatus from the business.