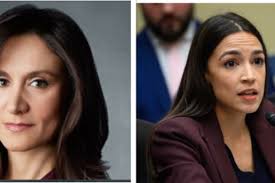 The total number of Democratic primary entrants – including Ocasio-Cortez – now stands at six.

Caruso-Cabrera, who was a fulltime anchor for more than 20 years at CNBC, is still a contributor to the business network.

She’ll take a leave of absence while her campaign is active.

She describes herself as a fiscal conservative and social liberal who was “part of a new and growing crowd of ‘sort-of’ Republicans.”

What the hell does that mean?

She said Ronald Reagan was her favorite president, followed by Bill Clinton.

It should be fun to watch this one play out.

There’s always CNBC if it doesn’t work out.