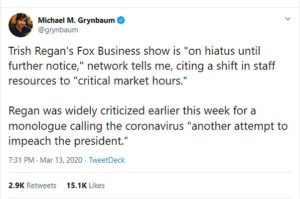 Regan is going along with, and trying to sell, the cover story about shifting resources, but the fact that her program on Fox Business is one of only two programs disappearing in the current set of circumstances would indicate something else is afoot. 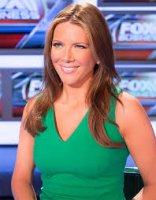 In her comments a week ago, Regan, the host of “Trish Regan Primetime,” said Democrats and the “liberal media” were using the coronavirus to “destroy the president.”

She blamed the stock market declines on Donald Trump’s rivals, calling it “another attempt to impeach the president.”

While she spoke, the headline “Coronavirus Impeachment Scam” appeared next to her.

Four days later, a national emergency due to coronavirus was declared.

And she is gone for the foreseeable future.

In addition to Regan’s program, the program that follows hers, “Kennedy,” will both be replaced by general-interest programs.