Remember when CNN liked to brag that “we cover the world”? 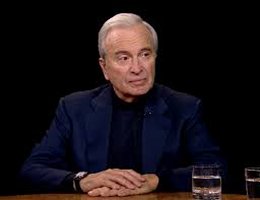 He’s also pretty disapproving of what CNN has put in its place.

“…[I]f you watch CNN from four o’clock to eleven o’clock at night – it’s the all Trump network,” he said, evincing some exasperation. “And… what happened?”

“I mean I get more news about the Middle East on Bret Baier at six o’clock than I do at CNN.”

His comments, delivered during a panel forum in New York, echoed CNN founder Ted Turner’s recent observation to CBS News that he believed the network “is sticking with politics a little too much,” while stating it would be served better by “a more balanced agenda.”

CNN’s Christine Romans, on the same panel, offered a rebuttal.
“I think the historic nature of the presidency is important here, right, and I mean it really is. What’s happening in Washington is just seismic.”

Well how about a compromise?

Cut back on the navel-gazing talking head gabfests and go out into the world to see how what is happening here is perceived overseas.

One would think that events within the borders of the “leading nation of the free world” have a global impact.

Why not cover that reaction?