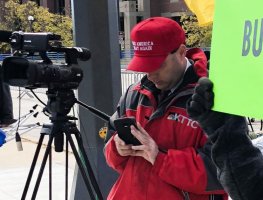 The MMJ had been with the station for less than a year.

The picture that got him busted was taken by a photographer for the “Minneapolis Star-Tribune,” who then posted it online.

In announcing Bunner’s firing, news director Noel Sederstrom noted that the station does not allow staff to cover stories while wearing clothing from political campaigns.

But on the station’s own Twitter feed Thursday, Bunner’s impending live shots were promoted with a picture of him holding the cap.

Don’t go looking for the promotional tweet. It’s been deleted.

Bunner’s career isn’t over, by any stretch.