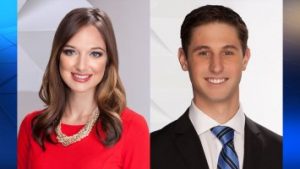 Reporter Brittany Hoke (left) has been bumped up to weekend evening anchor at Hearst’s WTAE in Pittsburgh.

She’ll sit alongside Ryan Recker and they will be joined by meteorologist Alex Alecci, (right) a new addition to the staff who came to Pittsburgh from KDLT in Sioux Falls, SD.

Hoke has served as a reporter for the station in the Westmoreland County bureau since June 2017.

She replaces Jackie Cain, who signed off October 19 to move to Hubbard’s KSTP in the Twin Cities