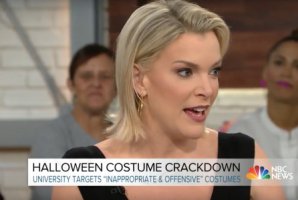 Such is the case with Megyn Kelly, once not so long ago a Fox News prime-time star who succumbed to the blandishments of Andy Lack who told her that he sharp-elbowed style would work well in a morning television slot.

But the woman who once flatly declared “Santa Claus is white” within the safe confines of the Fox News bubble and suffered nary a scratch, found a more mainstream audience on NBC to be a bit tougher.

There were a series of unforced errors made by Kelly over the course of “Megyn Kelly Today’s” 13-month run.

But the straw that broke the camel’s back came Tuesday when, while hosting a monochromatic panel on the subject of political correctness, Kelly wondered aloud what the big deal was about white people dressing up in black face for Halloween – because, she somehow remembered, it was okay in her neighborhood back in the 70’s and 80’s.

People seem to forget that “politically correct” is a derisive term invented by ill-mannered people as a substitute for “politeness” and “civility.”

Which today, more than a few people are lamenting the loss of.

Barely 48 hours, two apologies – one of them tearful – some intense criticism from her “Today Show” colleagues, and a hastily-scheduled Thursday morning re-run, she’s gone.

Scrubbed from the NBC schedule. Staffers on her program are being reassigned.

The official line is that she’s still with NBC, but if you have an idea where she might fit in, let them know.

The other official line is that she and NBC News boss Andy Lack had held discussions about winding her show down by the end of the year.

And, of course there is the reported $50 million she is demanding as reward for being a failure and an embarrassment.

She won’t be back.

And some folks out there are already floating a name as her possible replacement.

What could be safer?

There are also reports that Morgan Radford and Amy Holmes will be filling in on the now-nameless hour, with maybe even Al Roker showing up.

Which would be ironic, considering it was the very popular hour featuring Roker and Tamron Hall that got bumped to make room for Kelly.

Now if they’d only do something about Andy Lack.