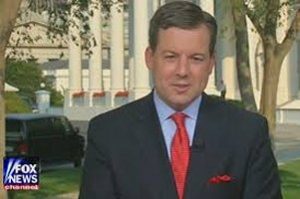 Fox News reporter Ed Henry used an ingenious and, at Fox News, unassailable comparison to defend former First Lady Michelle Obama in her assertion about her anger at Mr. Trump for his spearheading of the oft-debunked, never-abandoned birther conspiracy theory.

In her new biography, Obama says she can’t forgive Trump for his conspiracy-mongering on the birther issue.

Trump, of course, had to retaliate, saying he couldn’t forgive President Obama for what he did to the US military.

Which clumsily sidestepped the question.

Henry, in defending Mrs. Obama, likened her anger to Tucker Carlson’s outrage at those responsible for the threatening protest at his house earlier this week.

“I can’t blame her. I think she’s a sympathetic figure, and to just blow it off as ‘she was paid a lot of money to write a book’…She has every right to be angry about that as a human being. This is something all sides forget in these political debates. There are real human beings who are the politicians in some cases and are the people behind the politicians. President Trump, as a businessman, was attacking Barack Obama. He has a wife, he has young daughters, they felt like there were real consequences there, and I tie it to our colleague Tucker Carlson. People love to attack Tucker and take it to the next level, go to his home and try to terrorize his family. How dare they do that? I don’t blame Michelle Obama for being angry about the attacks she and her husband faced, and I don’t blame Tucker for being fired up for the nastiness.”