This is truly rich. With irony, hypocrisy and a healthy dose of arrogance. 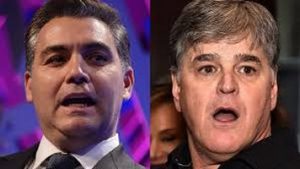 At the end of last week, Fox “News” prime time entertainer Sean Hannity conveniently forgot his election eve onstage appearance at a political rally where he denounced ALL of the reporters in the media pen as “fake news.”

You remember, the one where he ignored orders from the laughably inept Fox News managers to NOT appear on stage and then blatantly lied about an obviously staged appearance.

And without a hint of any self-awareness, he lectured CNN’s Jim Acosta whom he described as “a self-serving liberal hack with zero journalistic integrity” who “deserves to be banned” from White House press briefings.

Hannity, who likes to call himself a journalist when it damned well suits him, wasn’t finished.
“He’s unprofessional, it’s outrageous, it’s insulting. He’s supposed to be a journalist? That’s a charade. You do a disservice to real journalists in the press corps.”

Acosta, no stranger to ego’s pitfalls, moved on