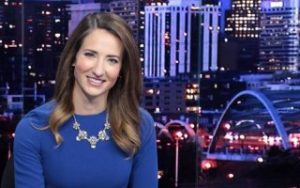 Pamela Padilla is out the door at Telemundo’s KDEN in Denver.

She had been the station‘s evening news anchor for the past three years, after joining the station in February 2015 as an MMJ.

There, of course, was no reason given for her departure.

Investigative reporter Rosy Zugasti is filling in as news anchor.

Whether the ubiquitous nationwide search will be mounted or someone promoted from within is un known as this point.