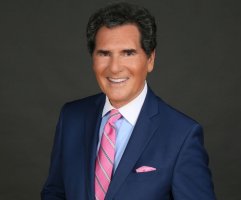 He did the usual tour of other markets early in his career, with stops in Boston, Chicago and Providence before landing at WABC in 1978.

He held down the anchor chair at WABC until 1989, when he moved over to WCBS.

After brief fling with syndicated television in the 90’s, Anastos was back  at a New York anchor desk, this time at WWOR.

After a second cup of coffee at WCBS, Anastos signed up in 2005 with Fox-owned WNYW, where he has held forth since, most recently on the 6 pm newscast.

He’s learned the key to success and longevity in the tv news anchoring business.

Having a good head of hair may be part of what’s keeping him on the air.

“Yeah, that helps! I guess it’s all in the genes. My father and my grandfather both had good heads of hair and so did my grandparents on my mother’s side,” he said. “It helps to have a good head of hair.”