We enjoy “The Baltimore Sun’s” David Zurawik for providing us with some of the most acerbic takes on local television and the corporate gnomes who pull the strings. 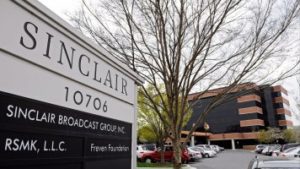 And as the local guy with Sinclair Broadcast Group just down the pike we can tell he takes a certain delight in sending some well-deserved potshots to the kids at HQ in Hunt Valley.

Last year at this time, the Sinclair Broadcast Group was riding about as high as a media company can ride these days.

The Hunt Valley-based company was poised to close on a $3.9 billion deal for Tribune Media that would make it the most powerful broadcast group in the nation with more than 200 stations and, finally, a presence in such big-time markets of New York and Los Angeles.

It clearly had a friend in the White House in Donald Trump, and it looked as if the president’s support was going to make the deal a slam dunk for Federal Communications Commission approval with a little help from FCC Chair Ajit Pai, who was greasing the skids by rolling back ownership cap rules.

Sinclair was giving $1,000 bonuses to employees at the end of last December with management saying what a great deal Trump’s tax package was for its employees.
…
But what a difference 12 months have made in the life of Sinclair. It might not have been as rough as what the Queen of England’s termed her “annus horribilis” in 1992, but it was plenty bad by any broadcaster’s standards.

In August the deal to take over Tribune not only turned to dust, but it ended with the Chicago-based company suing Sinclair for $1 billion for breach of contract. The FCC had sent the Sinclair deal to its doom by ordering further review after essentially accusing the company of shady behavior in the information it did — and did not — share with the regulators about its plan to sell stations in Chicago and Texas.

Sinclair has deservedly taken a PR pounding this year – for its arrogant mishandling of the Tribune merger – for its ill-advised campaign featuring local anchors at its stations mouthing the same words about “fake news” – for its hiring of Trump sycophant Boris Epshteyn as “chief political analyst to  perform “must-run” commentaries that are little more than press releases for the Administration.

All of which has left a once –high-flying group now mired in the mud of cronyism and PR boneheadedness.