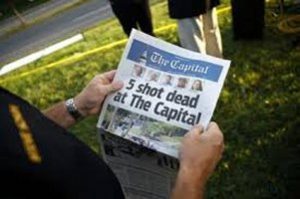 You can’t even call this a dubious honor.

It’s a disgrace. A tragedy. A horror. An insult to everything this country is supposed to stand for.

But there it is.

The United States, for the first time ever, is officially now among the 5 deadliest countries for journalists, according to an annual report now out from Reporters Without Borders.

80 journalists have been killed  worldwide so far this year — most notably US-based Saudi columnist Jamal Khashoggi — with 348 in jail and 60 more held hostage, according to the group.

Hatred whipped up by “unscrupulous politicians” has contributed to the shocking rise in the number of journalists murdered in 2018 according to Reporters Without Borders.

Of the 80 people in total listed as killed, the group determined 49 were deliberately targeted “because their reporting threatened the interests of certain people in positions of political, economic, or religious power or organized crime.”

Who would have thought?

In the US, in addition to the 4 Capital Gazette journalists (and a sales assistant) who were murdered inside the paper’s Annapolis, Md., offices in June, two other journalists- a local TV anchor and cameraman- were killed by a falling tree while covering Subtropical Storm Alberto’s extreme weather in North Carolina in May, lifting the total journalists killed to 6 here in the U.S., 2018 to-date.

The bottom line from the report: “Amplified by social networks, which bear heavy responsibility in this regard, these expressions of hatred legitimize violence, thereby undermining journalism, and democracy itself, a bit more every day.”