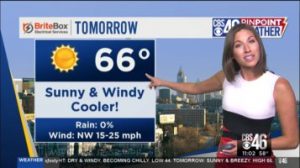 Ella Dorsey may want to re-think her possible candidacy for the top job at WGCL.

Who needs the crap thrown out by far too many bonehead viewers.?

Dorsey said she received death threats after she and her station cut into Masters coverage to broadcast a potential tornado Sunday.

At 1:33 p.m. on Twitter, she posted: “To everyone sending me death threats right now: you wouldn’t be saying a damn thing if a tornado was ravaging your home this afternoon. Lives are more important than 5 minutes of golf. I will continue to repeat that if and when we cut into programming to keep people safe.”

There were several complaints in Dorsey’s Twitter mentions, along with the CBS46 handle, as WGCL cut into several minutes of back-nine coverage from Tiger Woods‘ victory.

What makes the boneheads whining even more infuriating is that the cut-in were don split screen. You could still see the golf – it was just the audio that was cut off.

Get a life, people.