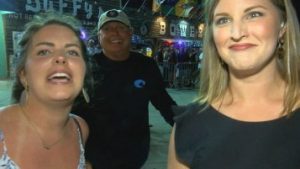 We’re handing out props to Casey Watson, a reporter for Gray’s WMBF in Myrtle Beach, SC for calling out the troglodytes who drunkenly harassed and pawed her as she attempted to do a live shot last Thursday night outside a town bar..

As Watson started her report, one woman stepped in front of the camera and yelled “f*ck her in the pussy.”

Meanwhile, several men and women allegedly grabbed and slapped Watson in the buttocks as she attempted to continue her live report.

After the incident, Watson went to war on the morons through social media, but evidently thought better of it and removed the posts, offering instead an apology of sorts.

Eventually, an officer of the Myrtle Beach, S.C. police department had to intervene to ensure Watson’s safety.