WWOR might be licensed to Secaucus, NJ, but soon, any reminder that it once actually  operated out of a New Jersey facility will be erased. 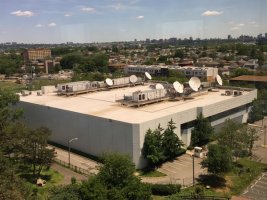 The building which once housed WWOR on Meadowlands Parkway was sold last September to a real estate developer and the dismantling of the building has begun.

WWOR, of course, is now co-owned with WNYW by Fox and both stations broadcast out of a Manhattan studio with transmitters located at One World Trade Center.

In reality, New Jersey has not had a fully-functioning television station ever since WWOR abandoned it for Manhattan’s bright lights.

Which means New Jersey residents get to scour Philadelphia, New York and, (gulp) Scranton-Wilkes Barre for any signs of local news.

But that, in reality, has been the case for some time.

Sure, WWOR made a half-hearted effort six years ago when it began airing “Chasing New Jersey” — a TMZ style news program that took the place of evening news broadcasts.

The program, which has since been rebranded as “Chasing News,” covers a smattering of local and national stories.

How could an entire state be left without a single full-service tv station licensed to it and covering it with a news department?