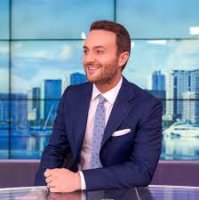 Samuel Burke, one of CNN’s rare reporters who appeared across all of the network’s channels: CNN/US, CNN International, HLN, and CNN en Español, is leaving the network`.

His Instagram post noted that “after almost a decade, I’m going for a new and great opportunity. It has been the greatest honor of my life to be with this audience every morning.”

No word on what that “new and great opportunity” might be.

He started out as an Anderson Cooper intern and moved on to become a producer for Christiane Amanpour before coming into his own.