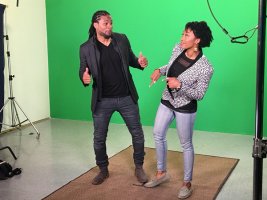 Up Cleveland way, Josh Cribbs, one of the more admired Cleveland Browns of the expansion era, and his writer, producer and activist wife, Maria, are teaming up to host a new morning talk show on Gray’s WOIO.

Repurposing with a vengeance.

It says here in this press release that the program will feature the couple discussing “local and national headlines, relationship and parenting topics, health and fitness, entertainment headlines, and lifestyle points of interest for Northeast Ohio.”

They sound excited, according to the press release..
“We’re excited to be a part of WOIO and WUAB’s fall lineup,” Josh says. “And we’re ready to take on the challenge and commitment to make the show a winner.”

We will be looking closely to see if there is a “pay-to-play” element in this little clambake.