Tonawanda, N.Y.’s gift to tv journalism has given his first post-“CBS Evening News” interview to a Buffalo journalist and one thing is clear. 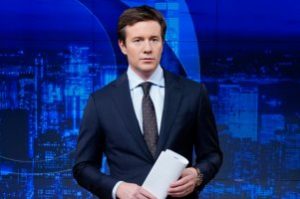 [Jeff Glor] doesn’t want anyone feeling sorry for him and he is upbeat about his next chapter at CBS.

“I know how lucky I am, and I try to remember that every single day,” Glor told “Buffalo News” tv writer Alan Pergament.

[Glor spent] Father’s Day weekend in Syracuse with his wife and two children to attend the wedding of a photographer he has stayed friends with after working with him in local news after graduating from Syracuse University.

When he was named anchor of the third-rated national newscast in October 2017, Glor called it a humbling experience. After all, it was once Walter Cronkite’s job. Glor agrees losing it was humbling, too.
…

After he was unable to increase the ratings of the evening newscast in the brief time he was given a chance, he had a message for his colleagues after his run ended: “I’ve been lucky enough to cover stories all over the world but the most meaningful part of my professional career were the emails and texts I have exchanged with colleagues and viewers over this past few weeks.”

Next weekend, Glor debuts as the newest co-host of the Saturday edition of “CBS This Morning.”

He’s been working on pieces for the program since his departure from the “Evening News” anchor desk.

His life goes on and he’s happy to be a part of it….and CBS News