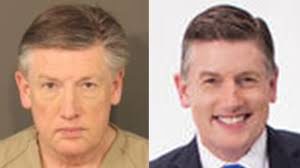 Mike Davis, a meteorologist at Dispatch-soon-to-be-Tegna’s WBNS in Columbus, OH, landed in a jail cell yesterday, charged with either selling, distributing or displaying an image of a young girl engaged in a sex act on Aug. 5.

Franklin County Sheriff Dallas Baldwin said in an afternoon news conference that two weeks ago, the Internet Crimes Against Children (ICAC) task force received a tip that Davis had sent and received a “significant” amount of child pornography.

“This establishes a pattern of behavior. One week ago that information was confirmed and more evidence was gathered,” Baldwin explained.

Davis was arrested at his Upper Arlington home Thursday morning by ICAC detectives.

Davis, 60, was charged with pandering child pornography and was awaiting an arraignment at Franklin County jail Thursday.

As of Thursday afternoon, he was listed as still employed by the station.

“At around 10 a.m. this morning, we learned that Mike Davis was arrested by the Franklin County Sheriff’s Office,” WBNS-10TV General Manager John Cardenas told The Dispatch. “We are learning more about the details and will be reporting on the story.”