This is not the life after television one would envision. 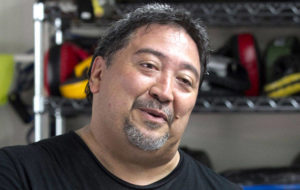 He was a sports anchor and reporter at KHNL right up until 2009 when the station consolidated its newsroom with KGMB to create Hawaii News Now.

He joined the International Brotherhood of Electrical Workers member when he started working at KHNL as a photographer.

When the station eliminated his position as sports anchor, he became IBEW’s assistant business manager and director of media.

Back in 2015, the IBEW election was over an unpopular proposal to increase the dues the union collects from its members.

The government says then-IBEW Local 1260 Business Manager/Financial Secretary Brian Ahakuelo made the proposal because he needed to replenish more than $1.4 million in union money he had embezzled.

Yamanoha and three other former union members provided investigators details of how they rigged the election at the local’s Guam unit.

He’s been in his current job at HART for the past two years.
No bets on whether he makes three years.

And that’s about it from the NewsBlues Cops ‘n’ Courts beat for now.