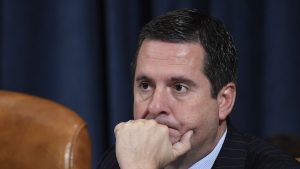 Rep. Devin Nunes (R-CA) passed up few opportunities to bash the media in the recent impeachment hearings, and now he’s suing what he calls the “mother of fake news” — CNN.

Nunes, who as a legislator is a helluva dairy farmer, filed a lawsuit against the network Tuesday, seeking damages of more than $435 million.

He’s suing over a November 22 report that Lev Parnas, the indicted associate of Rudy Giuliani, was prepared to tell Congress that Nunes met with Victor Shokin, the former Ukrainian prosecutor, in Vienna last year to discuss “digging up dirt” on Joe Biden.

He also denies that he took a trip to Vienna in December 2018 or that he communicated with Parnas.

So far, no comment from CNN on the lawsuit.