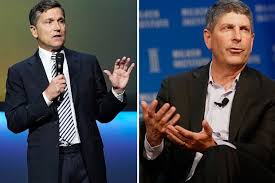 You can consider the changing of the guard is now underway at NBC, where Steve Burke (left) is stepping down as CEO of NBCUniversal on January 1st and handing over the reins to Jeff Shell, (right) currently the chairman of NBCUniversal Film and Entertainment

Burke will become chairman for eight months while Shell settles in as CEO.

Burke will officially bow out and retire on August 14 “following the Summer Olympics in Tokyo.”

The money flowed in at NBCUniversal under Burke, but his tenure was marked with controversy.

He accepted blame for the disastrous decision to recruit Megyn Kelly from Fox News, and Ronan Farrow alleges in his book “Catch and Kill” that Burke played a role in squashing his Harvey Weinstein investigation at NBC News.

Indeed he did, evidently fearful that farrow’s investigation would jeopardize some corporate partnerships between Comcast and Weinstein’s now-defunct production company.

Hmmm….now has anybody asked NBC News chair Andrew Lack or Noah Oppenheim, news division president how the future looks from their perspective.

We expect more shoes to drop.