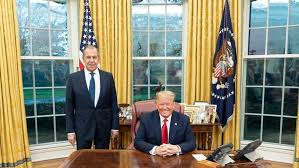 As Russian Foreign Minister Sergey Lavrov returned home from his visit with President Donald Trump in the Oval Office last week and that marvelous, and quite subliminal, photo op, Russian state media salivated over the spectacle.

“Vesti Nedeli,” a Sunday news show on the same network (think “Meet the Press” with someone who flails around less than Chuck Todd), pointed out that it was Trump, personally, who asked Lavrov to pose standing near as Trump sat at his desk.

Russian state television recently added a cynical new a narrative filled with half-joking ironies as they look at the American president’s bleak prospects when he does leave office.

Appearing on “Sunday Evening With Vladimir Soloviev,” Mikhail Gusman, first deputy director general of ITAR-TASS, Russia’s oldest and largest news agency, predicted: “Sooner or later, the Democrats will come back into power. The next term or the term after that, it doesn’t matter… I have an even more unpleasant forecast for Trump. After the White House, he will face a very unhappy period.”

The host, Vladimir Soloviev, smugly asked: “Should we get another apartment in Rostov ready?”

Soloviev’s allusion was to the situation of Viktor Yanukovych, former president of Ukraine, who was forced to flee to Russia in 2014 and settled in the city of Rostov-on-Don.

One can only imagine that tweets we would be treated to if the channel was on the DC cable system.