All natural couplings. All headed for breakups. Eventually it’s what happens. 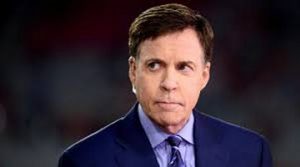 It is looking like, after 40 years, Bob Costas and NBC may be calling it quits.

Why? The guy has a contract that runs through 2021. What’s the problem?

For one thing, Costas doesn’t want to do the Olympics anymore.

And more significantly, he’s soured on the NFL and football in general.
From last January:
“In halftime commentaries, interviews with Roger Goodell and other prominent NFL figures, appearances on CNN and elsewhere, I have addressed the issue of football and its undeniable connection to brain trauma many times. Why? Because the evidence is overwhelming and the effects are often devastating.”

Costas says there are no hard feelings, but since his decision to bow out of the Olympics earlier this year, he’s been pretty invisible on The Peacock.

And he’d like to try something else – like a journalism show that would feature interviews, commentaries and a critical look at the world of sports and perhaps other topics.

A critical look at sports? Good luck finding the outlet willing to handle that.

And we sincerely mean good luck. Costas is a high-quality journalist –sports and otherwise.