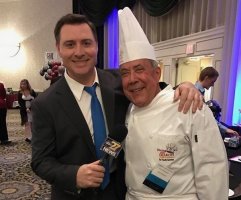 No, the picture isn’t a clue. Weekend co-anchor Mike Parker is the latest to leave Nexstar’s WHTM in Harrisburg, but he’s not planning on being a chef.

Park, whose last day is Thursday, is going to work as communications director with the Pennsylvania Fish & Boat Commission in Harrisburg.

He starts his new job next Tuesday.

News director C.J. Hoyt has nothing to say.

Parker is a self-acknowledged outdoors nut, so his new job seems a perfect fit.

And no, he says, his departure is completely unrelated to the army of women who have exited the station since March, while citing a hostile work environment.

But he is looking forward to more family time.