Where we are as a country is also sadly illustrated by the transformation of Lou Dobbs, once a fairly-respected financial journalist, into a better-dressed version of conspiracy hawker/performance artist Alex Jones.

We expected nothing less of Rush Limbaugh, desperately trying to hang on as the actuarial tables decimate his audience.

But Dobbs’ descent into InfoWars territory is rather stunning. 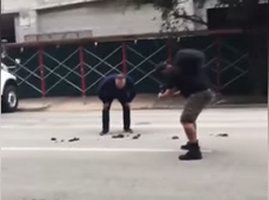 It has certainly heartened Jones, who we last saw screaming at a pile of feces. (no really – take a look)

Dobbs earned his ticket to wing-nuttery with several recent pronouncements calling the migrant caravan a “false flag” and this now-deleted tweet:

“Fake News — Fake Bombs,” Mr Dobbs wrote in the tweet, void of any evidence. “Who could possibly benefit by so much fakery?”

Jones is celebrating: “They’ve said all over the news: The Republican Party has now been Alex Jones-isized. Well, no, you’ve just met reality. It’s not me, people are now having common sense, it’s safer to say it now”

Well actually, nobody has been saying it all over the news.

Jones is obviously hearing the voices in his head again.