We think street reporters, especially those out on live shots, today need some hazard pay. 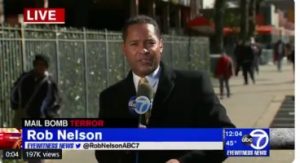 We’re thinking of Rob Nelson, of Disney’s WABC, who was doing a live shot last week when a woman who, surprisingly, was walking upright, yelled “fake news” to his face while he covered the bomb threats in New York City.

“Even after everything we saw, prominent people being targeted, CNN being targeted, the woman walked right by me and my live shot, looked me right in the face and said ‘fake news.’ That, is where we are now as a country,” he said somberly.