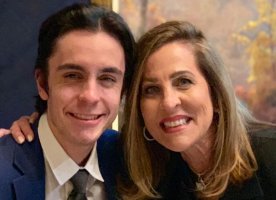 Peggy Kusinski, a sports reporter at NBC-owned WMAQ in Chicago, is breaking her 16-year-old son into the business on the new media side.

Jason Kinander, a junior at St. Ignatius College Prep, is a would-be journalist and, with his mom, is now the co-host of “The Sportscaster and Her Son,” a podcast title with a pretty clear title.

The mother-son duo plan to upload a new episode, each on a particular theme, every two weeks.

She had to sell the idea to her son, who is already writing for a sports site.

It took Kusinski almost a year to talk her son into joining her on the project.