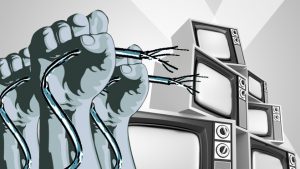 As Sinclair and AT&T try to resolve their difference behind a veil of secrecy, presenting an uneasy truce to that portion of the public paying attention, other areas of the cable/satellite/local world are courting more disruption.

Tegna has granted an extension to Charter Communications, allowing the cable companies to continue carrying its 45 stations in 37 markets while retransmission talk continue.

Tegna said earlier this week that 45 stations in 37 markets including Seattle, St. Louis, Dallas, Cleveland and Atlanta were in danger of going dark if a retrans deal wasn’t reached.

At least what we have here is two companies who know they both lose when customers lose access to a local station.

In this day and age, it is far too easy to seek out an alternative – and never go back.

Elsewhere, in a shortsighted move for both, NBC Sports Chicago has been blacked out to subscribers of Dish Network and its Sling TV streaming service.

Dish said that it offered to continue to carry the regional sports channel and that NBC Sports Chicago was seeking guaranteed payments for a minimum number of subscribers in a new deal.

It’s NBC Sports Chicago that is at risk here – while it is the exclusive for the NHL’s Chicago Blackhawks, it’s lost the vastly more popular Chicago Cubs.

“The regional sports model has been broken for years, and we’re facing a critical point in our industry,” said Andy LeCuyer, Dish senior VP of Programming. “NBC Sports Chicago is losing its most popular content in the Cubs, while demanding payment on a guaranteed minimum number of subscribers, when only a fraction watch the channel. It simply makes no sense for our customers.”