We’ve observed countless times that, by and large, cable news has little to do with news and is more an exercise in demonstrating the lungpower of the occupants of its endless array of bloviating panels.

So we have to say “Amen” to Greta Van Susteren, certainly no stranger to the vagaries of cable news, and her call to cable news personalities to stop picking on each other. 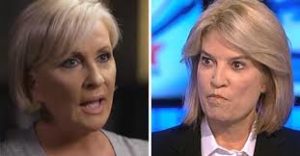 Which, it being cable news, led to a Tuesday Twitter battle between Van Susteren and Mika Brzezinski, the co-host of “Morning Joe.”

The topic: when is it appropriate for a cable news personality to call out a competitor.

In this case, Van Susteren was responding to still another ripping of Fox News and, inevitably, circus performer Sean Hannity by Brzezinski’s partner, Joe Scarborough.

“News orgs and hosts need to stop talking about competitors as each news org has so many skeletons in their closets…They should focus on their own jobs and stop watching each other,” Van Susteren wrote on Twitter

Brzezinski bristled: “Then please stop watching us. What a disturbing tweet. This is about corruption in the Presidency and the hosts that promulgate the President’s lies. A shame not to recognize the importance of this moment.”

Which is a very compelling argument.

Just not to Brzezinski: “Actually the truth matters. It may not to you. There are those using their platforms to promulgate the President’s lies. You know that. We will recognize it and condemn it when it happens. You may not care about the truth. We do.”

Over to you Greta: “Do you really believe – even for one second – that I don’t care about the truth?”

When both sides are, essentially, speaking to their respective choirs, it certainly is tempting to keep throwing the red meat out there.

But we (like Van Susteren) would rather see them offering some substance about the day’s events, rather than still another evisceration of a competitor.

It will never happen, Greta, but thanks for trying.