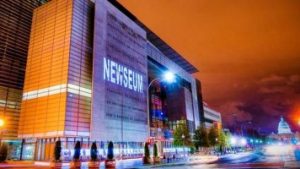 11 years and  just under 10 million visitors after it opened its doors to much fanfare and celebration, the Newseum is quietly going away at the end of the year – the victim of its own excess and the unrealistic expectations of its founders.

The facility, dedicated to celebrating the history of journalism in the United States and around the world as well as celebrating the importance of the First Amendment, occupied some of the most expensive real estate in the District of Columbia on Pennsylvania Avenue, just up the street from the White House.

It also charged a steep admission price ($25 a head) in a city chock-full of museums that allowed visits in free.

Still, for those who ponied up, the experience was a good one.

There just weren’t enough of them.

As a result, the Newseum hemorrhaged money from Day One.

In January administrators announced an agreement to sell the Newseum building on to Johns Hopkins University, a premier academic institution, which will use the facility for its D.C.-based graduate programs.

That’s one, and perhaps the only, way to amortize a $300-million debt.

The Newseum first opened in 1997 in Arlington, Va., before relocating in 2008 to the Penn Quarter facility, originally built for $450 million.

The folks at the Freedom Forum still hope to carry on some of the work that the Newseum was supposed to do, but fell short in accomplishing.

The creator and primary funder of the Newseum (more than $650 million to date and still counting), says it remains committed to continuing its mission to champion the five freedoms of the First Amendment and to increase public awareness about the importance of a free and fair press.

It’s a shame that wasn’t the primary emphasis all along.