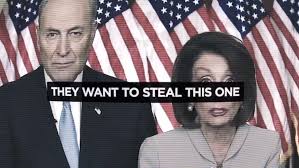 As Mr. Trump suggests that he and his acolytes start up their own news network to counter the newly-dubbed “corrupt news media” (he’s very proud of that, by the way), the Trump re-election campaign has launched a 30-second ad on television and social networking sites focusing on a debunked claim about former Vice President Joe Biden and the Ukraine controversy.

Now, CNN says it will not run the ad on its network due to factual inaccuracies.

“Joe Biden promised Ukraine $1 billion if they fired the prosecutor investigating his son’s company,” the cinematic trailer-like narrator blares. “But when President Trump asks Ukraine to investigate corruption, the Democrats want to impeach him,” the ad continues over footage of House Majority Leader Nancy Pelosi (D-CA).

“Our company accepts political and advocacy advertising across the political spectrum,” a CNN spokesperson said.  “Advertisers must substantiate all factual claims made in their ads. We cannot accept this ad as it contains statements of fact that are not true.”

What a concept – fact-checking political ads.

Wonder if it will catch on?

Not as long as the television network/group/station business plan counts on political ad revenue to thrive and make the mortgage payments.

Let us remember, falsely yelling “Fire” in a crowded theater is not covered by the First Amendment.