The civil war inside Fox News Channel between the straight news side and the prime-time “opinion programs” has been ramping up in recent weeks, and becoming more public. 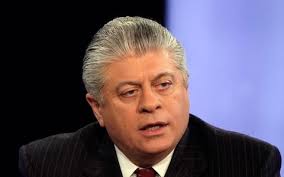 Now, longtime Fox judicial analyst Andrew Napolitano is adding additional fuel to the internal fire with his own opinion piece on foxnews.com.

Napolitano wrote that the summary released by the White House of a July 25 phone call between President Donald Trump and Ukrainian President Volodymyr Zelensky demonstrates “both criminal and impeachable behavior” by Trump.

“The criminal behavior to which Trump has admitted is much more grave than anything alleged or unearthed by Special Counsel Robert Mueller, and much of what Mueller revealed was impeachable,” Napolitano wrote.

He called Trump’s “allusions to violence are palpably dangerous” and said they “will give cover to crazies who crave violence, as other intemperate words of his have done.”

Let’s look forward to a calm, reasoned discussion when Napolitano next appears on either “Hannity” or “Tucker Carlson.”