We will be waiting breathlessly over the coming months for the broadcast and cable outfits to roll out their branding efforts for next year’s elections.

Fox News, which is the #1 cable network, is the first to roll out its 2020 and it includes a significant rebranding. 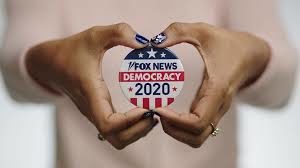 Interestingly enough, as the network jettisons, “America’s Election Headquarters” for “Democracy 2020”, it is also moving forward with a campaign that does not feature any of its on-air talent.

“America’s Election Headquarters” has been a Fox News Channel mainstay for the past decade.

No Fox News personalities appear in the network’s new “It’s In Your Hands” marketing campaign, which instead focuses on Americans and the choice they will be making in next year’s election.

“There has been a change in how consumers see elections,” said Jason Klarman, evp of marketing at Fox News Media. “Twenty years ago, we were concerned that there was voter apathy and people weren’t showing up at the polls. And nothing could be further from the truth today.”

The network’s promotional campaign rolls out in full force on November 3rd this year, two days before Election Day.