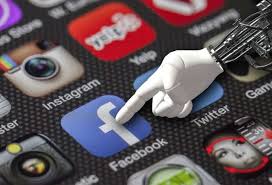 This week, Facebook removed a network of up to 200 Russian-backed accounts (50 of them on Instagram) that posed as locals weighing in on political issues in swing states, praising President Trump and attacking former vice president Joe Biden — illustrating that the familiar threat of Russian interference looms over the next U.S. presidential race.

The new wave of takedowns targeted separate networks of deceptive accounts created by Iran and Russia, including dozens of fake Facebook organization pages.

In a press call, Facebook founder Mark Zuckerberg said the takedowns show the company has come far since getting caught flat-footed in 2016.

“The fact that we’ve identified them proactively should provide some confidence that our systems here are working,” Zuckerberg said.

Oh, not so fast there, Mark.

It’s a thin track record so far on what has become the real home of “fake news,” left and right.

The Russian accounts were far more focused on U.S. domestic issues, but in terms of sheer numbers and longevity, the Iranian effort outstripped Russia.

One of the shuttered Iranian sites stands out as eerily reminiscent of Russia’s 2016 efforts—a Facebook page called “BLMnews” that purported to be a news site covering the Black Lives Matters movement.

The page had a meager 45 followers, and, according to Facebook, was devoted to driving traffic to an associated website that’s been operating since August 2016, according to Internet registration records.

So while we can feel better that some policing is going on, this gets to be a bit like “whack-a-mole.”

Others will keep popping up even as Zuckerberg declares a hands-off attitude toward paid politicals as far as fact-checking is concerned.

That would appear to loom as an even bigger problem.

We’ve already seen ads clearly based on fiction, conspiracy theories and, in the case of Elizabeth Warren, a failed effort to tweak the corporate conscience of Zuck & Co. with a commercial filled with deliberate and highly publicized falsehoods slide right by the Facebook mavens.

As long as the check clears..