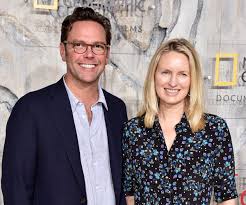 This might be construed at biting the hand that feeds James Murdoch and his activist wife Kathryn.

In response to the Australian wildfires that have devastated the country, Murdoch, the younger son of Rupert and brother of Fox News Channel overseer Lachlan Murdoch, is going after the climate denialism promoted by News Corporation, the global media group, and also by the Fox News Channel.

“Kathryn and James’ views on climate are well established and their frustration with some of the News Corp and Fox coverage of the topic is also well known,” a spokesperson for the couple said. “They are particularly disappointed with the ongoing denial among the news outlets in Australia given obvious evidence to the contrary.”

US viewers have consistently heard commentary from Fox News performers such as Laura Ingraham, who has said that “celebrities in the media have been pressing the narrative that the wildfires in Australia are caused by climate change”, before introducing guests who cast doubt on this interpretation.

One longtime News Corp executive, who asked to remain anonymous for fear of retaliation, described the comments by James, who continues to sit on the board of News Corporation, and Kathryn as an intentional attack on Lachlan and Rupert.

“They are pissing inside the tent and that’s unusual. It’s evidence of how high tensions are within the family over climate change. The majority of people who work here agree with James. We are hoping this may be the tipping point,” the exec said.

The rest of the Murdochs – ex-wives, siblings as well as Rupert and Lachlan themselves, are keeping quiet over the attacks