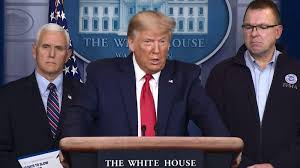 If you watched Sunday’s White House “briefing” on the COVID-19 emergency, you got perhaps 20 minutes of actual information and 60 minutes of self-pity, obfuscation and media attacks.

Including the above profound observation. What it had to do with COVID-19 public health emergency, we don’t know.

It is time for the broadcast and cable news networks to do some serious re-evaluation of their live coverage of the daily briefings on COVID-19.

That’s because they are being used more and more as a substitute for the now bygone political rallies Mr. Trump was so fond of.

And he makes it pretty clear he is tone-deaf. 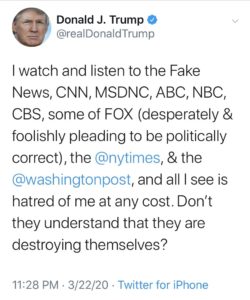 We favor monitoring them and, when real information germane to public health and the measures being taken to restore and ensure it is given, show the clip.

We mean the doctors, primarily, although the vice-president has often been a voice of reassurance and calm as well as a source of information.

But as for the rest of these “briefings:”

We’re not alone in this thinking.

These White House sessions — ostensibly meant to give the public critical and truthful information about this frightening crisis — are in fact working against that end.

Rather, they have become a daily stage for Trump to play his greatest hits to captive audience members. They come in search of life-or-death information, but here’s what they get from him instead:

● Self-aggrandizement. When asked how he would grade his response to the crisis, the president said, “I’d rate it a 10.” Absurd on its face, of course, but effective enough as blatant propaganda

Trump is doing harm and spreading misinformation while working for his own partisan political benefit — a naked attempt to portray himself as a wartime president bravely leading the nation through a tumultuous time, the FDR of the 21st century.

The press — if it defines its purpose as getting truthful, useful, non-harmful information to the public, as opposed to merely juicing its own ratings and profits — must recognize what is happening and adjust accordingly. (And that, granted, is a very big “if.”)

Should they cover the news that’s produced in them? Of course. Thoroughly and relentlessly — with context and fact-checking built in to every step and at every stage.

Trump is pushing a dangerous, false spin on coronavirus — and the media is helping him spread it

But what can be done?

“There is a very real possibility that in broadcasting these press conferences live or in quickly publishing and blasting out his words in mobile alerts, we are actively misinforming our audience,” Alex Koppelman, managing editor of CNN Business, wrote in an email for the network’s Reliable Sources newsletter.

Jay Rosen, a journalism professor at New York University wrote on his PressThink blog that the media needs to switch into “emergency mode”for covering Trump and clearly communicate that change to its readers and viewers.

“We are not obliged to assist him in misinforming the American public about the spread of the virus, and what is actually being done by his government,” Rosen wrote.

Rather than covering Trump live, he recommended, among other things, that the media should “attend carefully to what he says” and subject it to verification before blasting it out to the public.

The news media, at this dangerous and unprecedented moment in world history, must put the highest priority on getting truthful information to the public.

Taking Trump’s press conferences as a live feed works against that core purpose.

And then we have Rachel Maddow of MSNBC

“I know we ought to be getting used to this kind of thing by now, but I’m not. President Trump today, again, just flat-out wrong in public about this malaria drug that has gotten stuck in his mind, quite some distance from the facts,” Maddow said on her Friday program.

“If the president does end up saying anything true, you can run it as tape but if he keeps lying like this every day on stuff this important, all of us should stop broadcasting it. Honestly, it’s gonna cost lives,” she added.