“The New York Times” came out with a great read over the weekend about the troubles at the very top of Fox News. 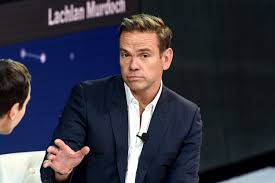 That would be Lachlan Murdoch, Rupert’s 48-year-old son, who was gifted oversight of the Fox Corporation.

While Fox News prime time circus performers were pushing that notion that COVID-19 was a Democratic- and media-led plot against Mr. Trump, repeatedly playing down the threat of what would soon become a deadly pandemic, hugely dangerous to the network’s mostly elderly audience, the younger Murdoch was busy acquiring, then crowing about, TUBI, a free streaming service of worn-out tv shows and movies.

The acquisition would drive “long-term growth,” he proudly announced in a news release on March 17.

That same day, the number of coronavirus cases in the United States surpassed 5,600.

Critics sometimes compare Fox, in its loyalty to Trump, to “state TV,” but that description is off. State TV implies command and control. The most-watched news channel in America has become, since the fall of its powerful founder, Roger Ailes, much more like the Trump White House: a family business where it’s not entirely clear who is in charge.

Fox News failed – and continues to fail – its viewers, allowing Sean Hannity to pretend he was ALWAYS concerned about the COVID-19 threat when less than to weeks ago, he was dismissing it.

The damage Fox did appears likely to extend beyond the typical media hits and misses.

Ben Smith, the Time reporter, asked Ashish Jha, the director of the Harvard Global Public Health Institute, who appeared on Fox News recently, whether he believes people will die because of Fox’s coverage.

“Yes,” he said. “Some commentators in the right-wing media spread a very specific type of misinformation that I think has been very harmful.”

With Fox now struggling with the virus in its midst (see previous story), perhaps the primetime hosts will take it more seriously.

We won’t hold our breath.