C-SPAN is the last refuge of reasonably intelligent discourse on its phone-in shows.

The refuge appears to be under siege. 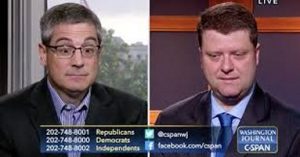 “The Washington Post‘s” Paul Waldman was guesting when a man named Christopher called in on the designated “Republican” phone number.

When the host asked “How to you know this?” the seven-second delay button kicked in and all went blank.

What bonehead “Christopher” followed up with, according to Waldman was the shouted comment “Death to the ni**er Obama.”

When the sound did come back, bonehead “Christopher” was gone and the host promised to try and get someone “who has something constructive” to add to the conversation.

C-SPAN may be the last entity out there possessing that ability.

Unless more Christophers decide the rest of us need to be more like them and start calling in.