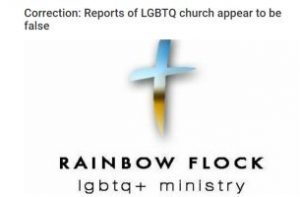 It’s simple – you get a press release so call the phone number on it and verify it.

Is that so hard?

Apparently it is for some.

Gray Television’s WYMT in Hazard, KY is doing a lot of bowing and scraping after a “fake news” story was posted on the website touting  a gay church that was about to open its doors in the community of Coal Run Village..

You would think that a press release boasting that something called the “Rainbow Flock Ministry church” “would have a dance floor with laser light show capabilities, reclining leather pews, rechargeable eHymnals, and a cedar meditation sauna,” would merit a fish eye and a phone call or two.

Here, the press release was dutifully cut-and-pasted onto the station’s website.

Even the “quote” from the purported pastor didn’t merit a second glance.
“We think that if Jesus had the opportunity to turn an old Magic Mart into a church for Appalachia’ LGBTQ+ community he’d jump out of his sandals at the opportunity, so we’re going to do just that,” Rainbow Flock pastor/founder “Clark Boyd” was quoted as saying in the release.

“Our team failed to meet the standards of journalism we set here at WYMT. They did not attempt to contact anyone who owns the building or the mayor of Coal Run,” WYMT Assistant News Director Kyle Collier added as a correction to the original story.

“Our journalist simply posted a release we were sent via Facebook and e-mail. It is inexcusable and we apologize to all of you who rely on WYMT as your source for local news.”

Oh…so THAT’S how this happens.